I am writing to you again, despite your previous mass boiler plate replies, to implore you to represent your constituents and the country and do your very best to stop the terrible damage that will be inflicted if we leave the EU. Damage which the Government’s own assessments have stated will happen. Damage which will only be intensified if you let the small fraction of your party represented by the ERG hold the entire country to ransom.

You claim that the only way forward is to “respect the referendum” because to hold another vote now would be undemocratic, even though the first referendum was merely advisory, illegally funded, based on proven lies, and without understanding or explanation of the effects of leaving the EU.

Your leader has said that another vote would “destroy people’s faith in democracy”, as if democracy meant voting once and never ever changing your mind.  Yet, this same leader has been defeated twice and still intends another vote on the very same deal. The only difference being that we are now even closer to disaster. Attempting to win by blackmail and coercion does not appear democratic to me.

The UK government has been reduced to an object of international ridicule. We will probably never regain the respect and influence we once had. You have spent money on Ferry Companies without ferries, embarrassed us all with lorry park experiments when even the lorries did not turn up, we are now on our third Brexit secretary; yet even now we plough on.

There is a way out of this mess. Your party got us here, in an attempt to appease a small number of MPs. It has backfired spectacularly and served only to amplify their influence. The Labour party is no better. Only the people can fix this, in a second referendum.

I disagree profoundly with almost all your policies, but in the end these have only temporary effects, as government will inevitably change. They will not cause the long term irreversible harm which leaving the EU is about to inflict. For our children’s sakes, to regain some respect in our institutions, for co‑operation with our neighbours, please stop this. Please support a people’s vote.

As usual, the sit at homes win by a huge majority. Oddly, although still pitiful, this was the highest turnout for several years – apparently because the labour voters bothered to turn up this time. 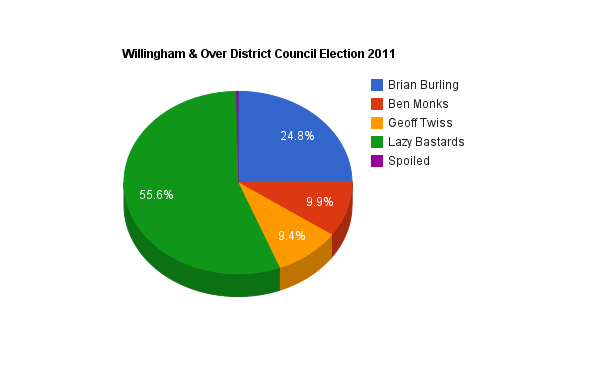 This time, the people of Willingham, Over and Longstanton didn’t vote for a representative on Cambridgeshire County Council.

Despite the political cloud hanging over Shona after her brief tenure as leader of the council, she managed to convince 63% of the electorate to stay at home.
Actual details:

How depressing is this? Just two candidates to choose from, 32% turnout.
The winner, as always and inexplicably a tory here in the countryside, started her statement complaining that Council Tax had doubled since 1997, and ended it complaining that the Government had capped it.

What should it be? Obviously the people don’t care either way.